“John, this is it, this is the glacier! The map said we only walk a half mile…” Which was true, the tourist map did point to this location, the human trail ended and all the other hikers had turned around by this point. There was nothing left to see, but a mound of snow across the river and a high pile of rocks on our side of the river.

“No Court, this is not it, this is a pile of snow, I think we need to follow the river.” He said and trekked on, climbing his way to the top of the high rock pile. It wasn’t until we reached the top, that we both discovered far in the distance, John was right. There was more to the glacier, but without a path, the approach to the glacial cave would be a slow scramble.

“Stay by the River, it will be faster and easier!” John cautioned. Every hundred feet the rocks grew, larger and larger, as we navigated through the rock field. Mist began to move in, dampening the ground, and our steps became more cautious.

After 40 minutes of pressing on, rock was slowly replaced by snow and soon the river disappeared under a sheet of ice.

“That cave could collapse any minute, please don’t go inside it.” Courtney reminded Johnny as they finally reached the cave. 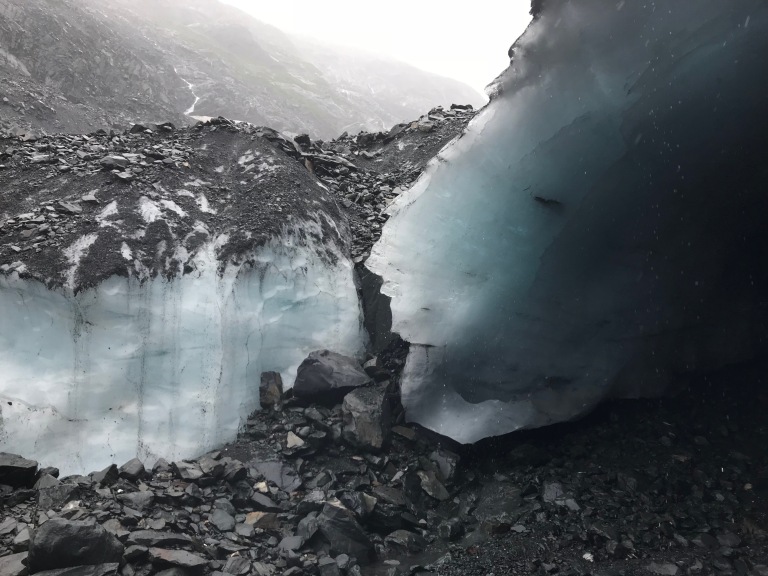 “I TOUCHED A GLACIER!” John Shouted with excitement (and then continued to tell every single person we met in Alaska this trip). It was a wonderful Adventure, and Johns quoted favorite, of all the Alaska Adventures we’ve had. If it wasn’t for his perseverance to continue following the river, we would have turned back with most of the other tourists, and missed this beauty.

Thanks for taking the time to read!